Portland Trail Blazers guard CJ McCollum left the team’s game against the Atlanta Hawks with a left foot sprain and will not return, the team announced.

McCollum will undergo an MRI on his left foot to determine the extent of the injury, according to Chris Haynes of Yahoo Sports.

He suffered the injury in the first quarter, but played through it until halftime and didn’t return in the second half.

Here’s the play it happened:

The injuries are hitting the Trail Blazers hard, as they are also currently without center Jusuf Nurkic who is expected to miss at least eight weeks after undergoing surgery on his fractured right wrist. 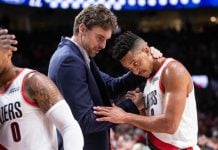 The Los Angeles Lakers target two centers to make up for...

Damian Jones to start for the Lakers vs the Kings