Tim Duncan opened up about trash talking in the NBA and why he never was a fan of it.

“It just wasn’t part of my game. It frustrates people more when you keep coming and coming and keep getting things done and no matter what they throw at you or what they do it doesn’t affect you and it actually ends up affecting them much more than it does you so that was my way, it fit with my game,” Duncan told The Ringer.

Duncan will be inducted in the NBA Hall of Fame in spring. 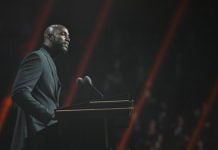