People often complain about the amount of money that’s paid to top sports stars, but there are a few things that they don’t take into account when they make those complaints. The first of those things is that pro sports careers don’t last forever. The majority of players have fifteen-year careers – stretching to perhaps twenty at most – after which they’re retired and have to go in search of other ways to make money. They need to make enough money to last a lifetime during that comparatively narrow window of opportunity.

The second thing that the complainers forget is that a career can end suddenly and at any moment. If a player suffers the wrong injury at the wrong time and doctors can’t repair the damage, they’re done. This is true of every sport, but basketball players often seem to suffer more than most. The most innocuous of ankle, foot, heel, or even toe injuries can turn out to be career-enders – and if a player has only had two or three years in the sport at the time that injury occurs, it will leave them out of pocket.

For these reasons and many more, embarking on a career in professional sport is a gamble. By trying to make it in the NBA, you’re taking a chance on your future prosperity and income just as surely as you would be by spending your money on the “Basketball Star” on websites like Rose Slots. It’s possible to play that online slots game for hours, winning a little and losing a little, and walk away with more money than you started with. It’s also possible to bet too big on your first bet and face the prospect of your game being over before you’ve even got started. That’s the nature of online slots, and it’s also the nature of basketball.

Aside from costing players (and their teams) money, injuries rob fans of players who could, had injuries not intervened, gone on to become legends. For our money, here are the potential all-time greats who were denied greatness because of injuries.

Fans don’t often look to seven-foot-tall players for skill. Smaller players tend to have better skills, whereas taller players handle the more physical and practical side of the game. Jonathan Bender was an exception to that rule. He was tall, but he was also extremely light on his feet and surprisingly agile, as many of his opponents discovered to their cost. He was unstoppable during his NBA debut season, generating headlines and terrorizing everyone who played against him on his way to double-digit averages. Almost as soon as he arrived, though, his career was over. His style of play appeared to ask too much of his knees, and his knees couldn’t give up. After just eight seasons in the sport – many of which were curtailed by injury problems – he was forced to hang it up at the age of just 25.

Fans of a certain age will have very fond memories of watching Hardaway play alongside Shaq O’Neal or Orlando Magic during the 1990s. They were almost unstoppable when they were both on form, and nobody relished coming up against them. Hardaway was the 3rd overall draft pick in his 1993 rookie season but played with the maturity and skill of a player five years older. Who knows how good he might have become when he entered his prime years if things had been different? Four years into his career – a career in which he’d made the All-Star team every year – he was struck down by a dreadful knee injury that led to numerous surgeries. Unlike Bender, Hardaway eventually came back from surgery and returned to the sport, but he was never quite the same player.

It’s always a sign of a player whose career is in jeopardy when they can’t put roots down anywhere. Look Danny Granger up on Wikipedia, and you’ll see that he went through several NBA teams during his final years in the sport. He made very few appearances for the majority of those teams, and in some cases, he made none at all. Although the records say that he retired with the Pistons in 2015, the reality is that he’d never stepped on a court for them, and that the useful portion of his career ended two years earlier with the Pacers. Even a year before that, injuries had limited him to a mere five appearances for the team. Granger’s problem wasn’t so much a specific injury as his persistent left knee tendinosis. When it flared up, it made it impossible for him to play, and nothing could be done to prevent flare ups from occurring. He won “Most Improved Player” in 2009, and so he left his mark on the NBA, but he could have been so much more.

The name ‘Yao Ming’ will have appeared immediately in the minds of most people when they opened this article. The giant was supposed to be the NBA’s next mainstream breakout star, but fate had other ideas for him. During his early career, he was as reliable as reliable could be, playing all but two games of his first three seasons. After that, injuries began to accumulate with devastating regularity. It started as an innocuous fracture of his toe that seemed to lead to a full fracture of his left foot, and as soon as he’d recovered from that, he fractured his right knee. That was in December 2006, and it marked the end of Ming’s time as a top-tier basketball player. He somehow managed to labor on for another five years to ever-diminishing returns, and when he eventually retired in 2011, he received little of the fanfare that his early form deserved. He’ll always be one of the NBA’s greatest “what if” stories.

Although Yao Ming might be the most famous injury-related hard-luck story in the NBA, the tale of Brandon Roy is even sadder. Roy played basketball for just six short years, but in that time, he became a three-time All-Star and picked up the Rookie of the Year award in his first season. Although he didn’t know it back then, he’d already started to suffer the effects of a degenerative condition in both of his knees. Try as he might, Roy couldn’t overcome the condition, and by 2011 he couldn’t continue. Even now, a decade later, the media still want the Portland Trail Blazers to retire his number 7. That’s a mark of the respect and affection that fans of the sport still have for him. Roy was only 27 when he retired, but he didn’t allow the experience to sour his love for basketball. Today he’s a high school basketball coach and was named as coach of the year as recently as 2017.

Shaq: “If Penny didn’t get hurt, he would have been one of the top 3 players”

Enes Kanter Freedom to Yao Ming: “Will you join me in visiting Uyghur Slave Labor Camps?” 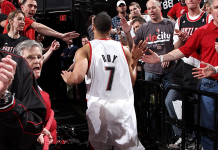 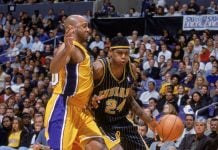