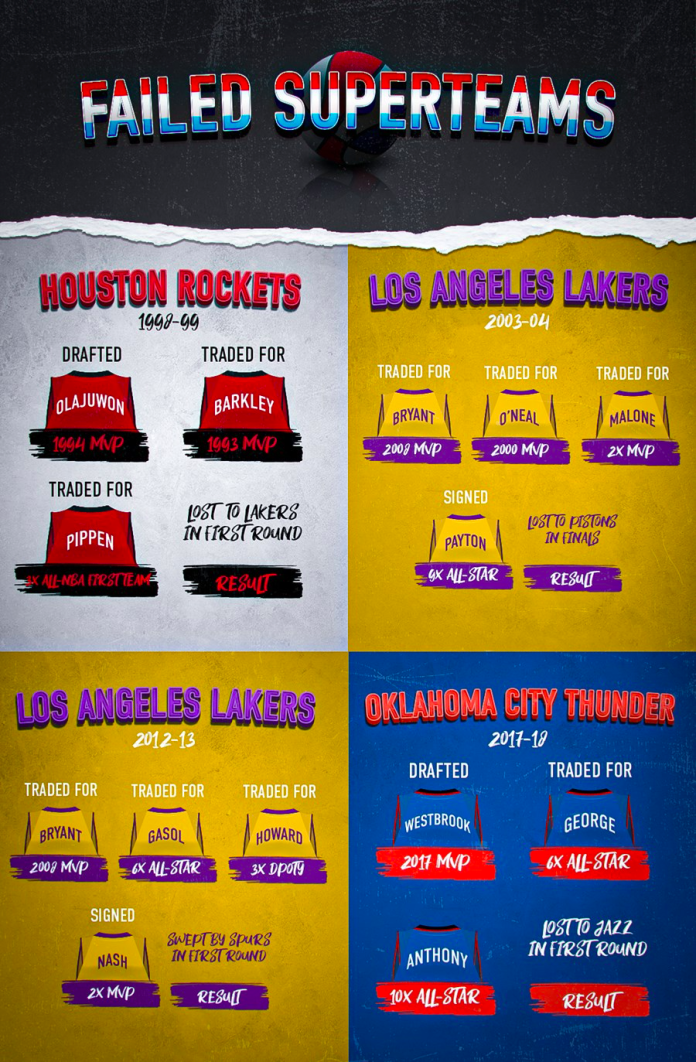 A super team does not always guarantee success, and some franchises have learnt the hard way, according to Betway the below 4 super teams didn’t quite live up to the billing.

The Rockets wanted more from their time with “The Dream” who was in the twilight of his career so they poached Pippen from the Bulls, fresh off a three-peat run that must have left him wanting in legs and energy. Charles Barkley, a hungry superstar who was looking for the elusive title that would elevate his already Hall of Fame career to higher heights, was added to the mix, but this version of the Rockets was not any match for the highly energized, driven, motivated and much younger Lakers led by a rising Kobe and the dominant Shaquille O’Neal.

The Lakers had the greatest one-two punch in the game, but the two men just could not seem to get along or put away their ego for long enough. Kobe and Shaquille O’Neal needed more presence to calm them down, at least that is what the franchise thought when they added Gary Payton and Karl Malone, with Pau Gasol already on the team. The Lakers were making it rain All-stars, but in that season alone, injuries would become a poster word for the team and losing to the Detroit Pistons in the finals would be the straw that broke the camel’s back with O’Neal moving on to the Miami Heat in the offseason.

With O’Neal long gone, the Lakers were a team in the image of Kobe Bryant. No longer was all that he was, half of Kobe still better than half of the league and all he needed was the right cast, especially players that could match his intensity but not challenge his authority. The front office would add a wiser but much older Steve Nash to the team, alongside the biggest name in the NBA at the time, Dwight Howard. Howard wanted a ring but he did not have the attitude that Kobe would qualify as a winner, and when Bryant would go down with an Achilles injury, the team would suffer to find any kind of leadership or fire like the one Kobe was known for. The team would not make any kind of impact that was expected and that would be that for an expensive hope.

Russell Westbrook put together one of the most entertaining MVP runs in NBA history, averaging a triple-double but that was about all the spark that there was to the Thunder after Durant left. The team was in danger of becoming an afterthought in no time, and that was unacceptable with Westbrook around. The Thunder front office went all out before the start of the 2017 season and got Paul George from the Pacers and one of the league’s best scorers in Carmelo Anthony. However, Anthony was past his prime and George not is most consistent best. That OKC team would be outplayed in the first round of the playoffs and that would be the end of any super team hopes, as Anthony was traded to the Atlanta Hawks after a declining season.

Magic Johnson on Lakers’ new head coach: “The most important thing to me is accountability”

Stephen A. Smith DOESN’T LIKE any of the Lakers’ head coach frontrunners

Jay Williams: There is A LOT of hesitancy with taking the Lakers head coaching job!