When Steve Francis was drafted by the Vancouver Grizzlies in 1999 he immediately wanted out.

He was hoping for a trade, but as the summer went on, the rookie remained in Vancouver. Francis had to weigh his options fast and going to Europe seemed like the move.

Steve was going to play in Italy, but finally received his trade wish in late August. The Houston Rockets traded for him in an eleven player deal. Francis sat down to discuss his thought process about almost playing in Italy just a few months ago.

“We were looking at Italy. We would’ve probably been the first ones to do it, you know just until that contract was up. I was going to take the chance because they would’ve gave me more than my rookie contract overseas.” 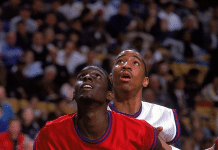