FC Bayern Munich, with a strong defense, limited Crvena Zvezda and won by 15 points (74-59) in the Audi Dome on Friday.

This was the fifth victory for the German squad after seven rounds in the EuroLeague, while the guests, with one game less, have two wins and four defeats.

Andrea Trinchieri did his homework perfectly. He prepared the squad defensively and the result was to limit Crvena Zvezda to just 39.4% for two and 28.6% for three points. Also, Bayern‘s defense did a great job with Jordan Loyd, letting him score nine points (1/5 for two, 1/9 for three).

Bayern wasn’t shining at all, but the team used Zvezda‘s weaknesses, especially in the fourth quarter, when they left their opponent scoreless in the final four minutes. That way, the German team secured the victory.

The best PIR (17) for Bayern belonged to Vladimir Lučić. The Serbian small/power forward scored 12 points, while his teammates Nick Weiler-Babb and Wade Baldwin IV added 15 each.

Johnny O’Bryant and Corey Walden were the only players in Crvena Zvezda with more than 10 points. The former had 17, while Walden scored 12. 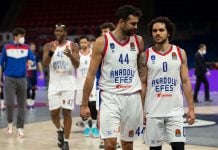 CSKA is getting closer to the EuroLeague Playoffs