Kevin Durant shared his thoughts on the possibility of the 2020/21 season being played in a “bubble”.

The two-time NBA champion will make his debut with the Brooklyn Nets next season, but this is not likely to happen in front of Brooklyn’s fans.

“Obviously, I am looking forward to it, but I dodn’t know, we will see,” Durant said during a recent podcast with WNBA players Breanna Stewart and Kelsey Plum, adding the operation will be the same as at Disney World (isolated, get tested every day etc).

Durant missed the entire 2019/20 season recovering from his Achilles tear.

The Disney bubble has been working to perfection, as there have been zero positive coronavirus tests since games started.

Durant and the Nets are expected to fight for the NBA title next season, with Kyrie Irving also healthy and ready to lead the team to the top.

No matter if the 2020/21 season will be played in a “bubble” too, several betting and casino websites, like jeux casino, have already been considering Brooklyn an odds-on favorite for the NBA Finals and the championship.

Other websites, like cinemacasino.com, are already placing Durant as a candidate for the MVP award. 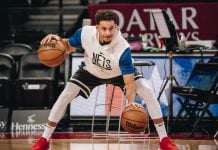