Shaquille O’Neal predicted Paul George will finally show up in Game 5 between the Los Angeles Clippers and the Dallas Mavericks on Tuesday.

The superstar of the Clippers has been struggling offensively in the series so far, shooting 20-for-69 in the first four games.

“I guarantee Playoff P getting 27 tomorrow. I guarantee it,” the NBA Hall of Famer said.

The series are tied at 2-2 and whoever wins on Tuesday will come one step away from the Western Conference playoffs.

Kawhi Leonard, Doc Rivers and the rest of the Clippers squad fully support George, though, despite his shooting struggles. 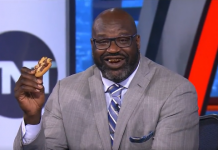