Los Angeles Clippers head coach Doc Rivers knows that Montrezl Harrell still needs to get up to speed after not playing any games in Orlando before the playoffs.

“His rhythm’s not great. His conditioning is not great,” Rivers said. “It’s just a tough place to try to integrate a guy. … We need him, but it’s tough to throw him in.”

Harrell left the “bubble” and had a lengthy absence away from the team after missing all of the scrimmages and “seeding games” due to the death of his grandmother, who he was very close to.

He also struggled at the free-throw line, making four of his 10 attempts.

The Clippers struggled as a team in Game 2 against the Dallas Mavericks and will need Harrell to play well off the bench alongside fellow Sixth Man of the Year candidate Lou Williams. 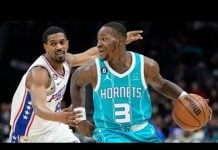