Some good news for both Iceland and Great Britain in the upcoming Eurobasket 2015 Qualifiers; Bosnia, who are already missing Nihad Djedovic are now another big-name player short (It’s isn’t Mirza Teletovic. He’s still around).

Bosnian under-20 star Jusuf Nurkic will be be suiting up for the senior men’s side for their Eurobasket Qualifying campaign, which starts in two weeks time in London against Great Britain.

Nurkic led the under-20’s to promotion from Division B and won the MVP award as well. The 20-year-old will be playing with the Denver Nuggets next season.

I’m really sorry that I cannot help the team,” the talented center said.

“I am especially sorry that some people want to make a story out of me leaving training camp, it is really wrong to talk like that.

“I’ve always said that I would play for Bosnia and Herzegovina and it will be so in the future.

LOJESKI TO SUIT UP FOR BELGIUM

Olympiacos’ Matt Lojeski will represent Belgium in the Eurobasket Qualifiers as the Lions aim for their third straight Finals appearance.

Lojeski, an American with a Belgian passport will be facing FYR of Macedonia, Belarus and Denmark in Group D.

Burtt is an American-born Ukrainian passport holder. He played for Ukraine at Eurobasket 2011 in Lithuania.

ANOTHER NBA STAR TO LAND IN CHINA?

Metta World Peace could be heading to China. The forward has reached an agreement in principle with Chinese team Sichuan Blue Whales, the General Manager for the club confirmed to Sports Sina.

MULLINS FOR CHINA TOO?

Another of the NBA breed, Byron Mullens is headed out to China as well, it is believed.

The big man, who is a free agent after spending last season with the Los Angeles Clippers and the Philidelphia 76ers could be penning a deal with Shanxi Brave Dragons. 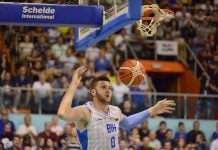 Metta Sandiford-Artest: “I’m definitely trying to be a head coach one day in the NBA”