The Pelicans are one of the teams slated to play on the first night of the restart in Orlando and will kick things off against the Utah Jazz this Thursday. Williamson, who had to leave the bubble for family reasons, only came out of quarantine on Tuesday night and did not participate in any of his team’s three scrimmages. However, he wants to play as much as he can and is hoping he won’t have his minutes restricted.

“I think I can play the whole game. I’m just a hooper,” he told USA Today following Wednesday’s practice. “I don’t know nobody that is going to say, ‘No, I can only play 10 or 15 minutes at a time’. I play the whole game if I have to. I’m a hooper.”

Pelicans head coach Alvin Gentry isn’t sure Zion’s even going to play in the opener, having revealed that the former Duke star will be a game-time decision.

“That’s something that I would leave up to the medical staff. Obviously, as a coach, you want him out there as much as we can have him out there,” Gentry explained. “We have many guys who are more equipped to make those decisions than I am from a health standpoint and a minutes-played standpoint. It’ll be collectively something that we’ll sit down, talk about and try to figure out.” 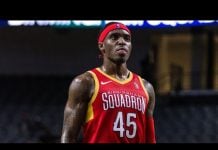