Draymond Green opened up about his feud with NBA Hall of Famer and TNT analyst Charles Barkley.

Green said there is no feud between the two, yet he is tired of hearing what Barkley says about him.

“I’ve done too many great things in this league and won a lot to hear some of the stuff he’s saying about me. It is what it is. He’s got a job to do, I got a job to do,” Green said with Barkley present in their new show called The Arena. 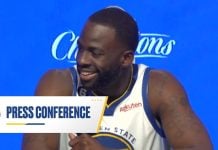