After originally opting out of the season restart, there is growing belief that Indiana Pacers star Victor Oladipo will attempt to play.

Oladipo has reportedly had multiple strong team practices in Orlando, according to Shams Charania.

Oladipo has been fully participating in five-on-five scrimmages in Orlando, and there’s now optimism around his playing status, Charania also notes.

Oladipo’s trainer said that the two-time All-Star is “in the best shape he’s ever been,” but they were originally concerned about him suffering another injury due to the shortened ramp-up period before the eight “seeding games” and playoffs.

Looks like all Oladipo needed was some live action again to see how his body feels and it sounds like it feels good enough to give it a shot and play.

The 28-year-old is scheduled to be an unrestricted free agent in summer 2021, unless the Pacers choose to sign him to an extension.

Victor Oladipo not returning in near future – Brian Windhorst 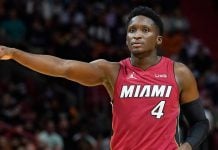 Victor Oladipo turns down potential starting offer from Wizards, elect to reunite with Heat this season