The Philadelphia 76ers veteran Al Horford will play without a social justice message on the back of his jersey.

Horford told media that he went “back and forth” on his final decision, noting that he appreciates the league allowing players to be vocal on racial justice matters.

According to Cameron Fields of USA Today:

“I kind of understand and share Mike Scott’s sentiment a little bit,” Horford said. “Even though this is a great platform for us to promote things, I think that maybe having the ability to say what you would want to say or kind of leave it like that. But at the end of the day, everyone has their own — makes their own decision, whatever they feel is right, whatever they want to do.”

The former Celtics’ big man is expected to start from the bench in Orlando restart. The Sixers have had the sixth-best record in Eastern Conference, before the NBA shut down in March. 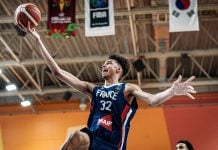