Washington Wizards players Thomas Bryant and Gary Payton II reportedly tested positive for coronavirus and did not travel with the team to Orlando.

Swingman Garrison Mathews also did not travel with the team for personal reasons.

The two players will need to self-quarantine for at least 14 days and test negative twice before returning to participate in basketball activities.

If they ultimately decide to play, they will still have to travel to Orlando on their own, self-isolate and test negative twice again.

Head coach Scott Brooks recently dropped a hint when addressing the media in a video call from Orlando.

“A couple of guys did not make the trip. Hopefully they will be joining us soon,” Brooks said. “But with the CBA medical [restrictions] I can’t get into who did not participate.”

That meant that coronavirus was likely involved, as players with injuries can be named.

Bryant and Payton are the first cases from the Wizards made public. 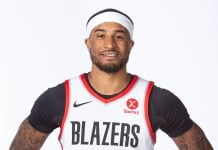 Dennis Schroder, Thomas Bryant expected to play for Lakers in Friday vs Pistons