Hear why Broussard thinks the Boston Celtics small forward Jayson Tatum is already a star, regardless if they win a title.

He also gives his thoughts on the Philadelphia 76ers’ chances in the playoffs and the three discuss whether they agree with ex-NBA big man Hakeem Olajuwon that the Houston Rockets point guard James Harden is a player to the level of Michael Jordan: 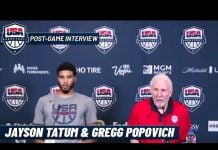