The 2020 NBA draft will be held this year on October 15, 2020, in Brooklyn, New York. This is the first time since 1975 when the draft will not be held in June. Also, the draft lottery has been postponed for August 25.

During the event, NBA teams will take turns in selecting future players – either among amateur United States college basketball players, or from other eligible players.

The general consensus is that Anthony Edwards has by far the best chances to be drafted as first overall. The same is valid also when betting at Unibet on the NBA Draft 2020, where Edwards has -110 odds.

While we remember that the likes of Magic Johnson, Shaquille O’Neal, Tim Duncan or Patrick Ewing were among the first picks over the decades, here are the top 5 favorites of winning the 2020 draft:

The former Georgia Bulldogs player, born in Atlanta, is a powerful shooting guard and stands at 6 feet 5 inches. Since months now he is viewed as the potential No. 1 pick and he declared for NBA Draft in March. The major recruiting services rated him as one of the best players in the 2019 class. Among the honors up until this age are the McDonald’s All-American Game and the Jordan Brand Classic.

Born in Nashville, Wiseman was a center for the Memphis Tigers, and he is listed at an impressive 7 feet 1 inch. In his case, the most recruiting services ranked him the first in the 2019 class. He also played in the McDonald’s All-American Game. Together with Cole Anthony, Wiseman shared the MVP award for the Jordan Brand Classic. He was part of the United States team that won the FIBA American Under-16 Championship in 2017.

After going to high school in native California and then Ohio, in 2019 he moved to Illawarra Hawks basketball team which plays in the National Basketball League (NBL) in Australia, where he won the NBL Rookie of the Year in the same year. Prior to this, Ball played for Prienai in Lithuania, and for the Los Angeles Ballers, both in 2018.

At 6 feet 7 inches, LaMelo is the brother of Lorenzo Ball, the 22-years old point guard who moved from Los Angeles Lakers to New Orleans Pelicans in 2019. Himself a point guard, LaMelo is the son of LaVar Ball, a known businessman.

Although he is just 19 years old, the Israeli-Serbian player was twice champion of the Israeli League. He plays for Maccabi Tel Aviv since 2017, in the small forward and power forward positions. At just 16 years, he won the League Cup with his team.

Avdija was also part of the powerful teams of Israel at the 2018 and 2019 FIBA U20 European Championships, where the country won the title each time. He was named in the All-Tournament Team in both years, and in 2019 he won the MVP, after scoring 23 points in the final against Spain, 92-84. Born in Israel, Avdija is 6 feet and 9 inches tall. 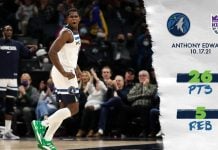