Rapper and long-time Los Angeles Lakers fan Snoop Dogg joins ESPN’s sports analysts Jalen Rose and David Jacoby and talks about the Lakers’ chances to win it all once the season returns in Orlando. Snoop says the Purple and Gold are their own biggest threat and after watching The Last Dance documentary, focusing on your own team is the key.

Rose later asks a Lakers’ die-hard fan if the Los Angeles Clippers could ever be the team of L.A. (1:34) and the two then discuss being in the game with legends such as Tupac, Biggie Smalls, Nipsey Hussle, Kobe Bryant and Michael Jordan: 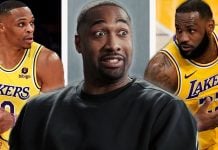