The 19-year-old center was ruled ineligible for NCAA after Hardaway paid $11,500 to his family to help them move to Memphis. Amid the suspension, Wiseman hired an agent and announced he was leaving Memphis to prepare for the 2020 NBA Draft.

“That was crushing because James is pretty much innocent. There was nothing malicious with that. They can paint any picture however they want to paint it. For that kid to have to sit out 12 games was devastating,” Hardaway said. “They actually pushed him out of college. I don’t think that’s what it should be about. I don’t think you put kids in a position and try to choose whether you stay in school or leave school while you’re already there.”

It was very tough for the Memphis Tigers head coach when Wiseman left college: “When he left, it crushed me because I knew that he needed to be there, he wanted to be there but it was just too overwhelming what happened with the NCAA.” 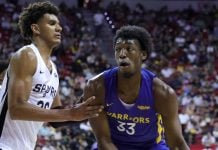 James Wiseman reacts to his first game since knee injury