Unicaja Malaga guard Zoran Dragic has informed the Slovenian Basketball Federation that he is fit and will play for the national team in Spain this summer at the FIBA World Cup of Basketball.

The 24-year-old has been experiencing pains in the areas of the inguinal canal [abdomen] and sat out Unicaja Malaga’s game with Gran Canaria last Sunday. Once the Liga Endesa season concludes, Dragic will have surgery on his abdomen to place a layer of mesh around the painful area.

Once the operation is completed, Dragic should be given the all clear to resume training and meet up with the Slovenian national side.

“The Slovenian Basketball Federation has offered [Zoran Dragic] full support during his rehabilitation and expressed the hope that he will have a good operation and full recovery,” said national team director Matej Avanzo.

Zoran’s brother Goran Dragic was in Milan last week, as he took part in several activities with the Euroleague and their corporate social responsibility program One Team. The Phoenix Suns guard was recently awarded the NBA’s Most Improved Player and along with his brother were Slovenia’s brightest stars at Eurobasket last summer in their home country.

Having the two together at the FIBA World Cup of Basketball will definitely be music to Slovenia’s ears as they travel to Gran Canaria to face Australia, Lithuania, Angola, Mexico and Korea in Group D.

EuroBasket 2013: Zoran and Goran deadly in transition against Greece 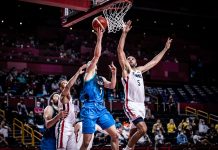