Harrison Barnes is quite optimistic the NBA season will return in some kind of format this year. The Sacramento Kings’ forward said he is hearing positive things around the league, per NBC Sports:

“I think a lot of it is up in the air still,” Barnes said. “But I think there’s a growing sense of optimism around the fact that there will be games again this season. Whether that looks like 16 teams or all the teams playing, whatever type of format, all of that is still in the air, but I think there’s a growing confidence that there will be games at some point to finish out the season.”

Barnes is not pretty sure about the format, but he believes the Sacramento Kings will return to play for the 2019-2020 season.

Very few executives outside of the league have a real idea when it will be safe to continue play, but it’s clear that many players including Barnes want to return on the court as soon as possible. 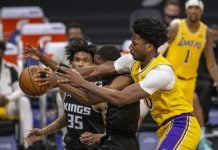