Michael Wilbon and Jalen Rose talk about the importance of Phil Jackson to Michael Jordan, Scottie Pippen, Dennis Rodman and the Chicago Bulls in the 1990s, as well as Shaquille O’Neal, Kobe Bryant and the Los Angeles Lakers in the 2000s. They also discuss the overlooked Indiana Pacers vs. Chicago Bulls rivalry, which culminated in the seven-game 1998 Eastern Conference finals.

Dwyane Wade on 2010 Free Agency: Me and LeBron almost joined the Bulls 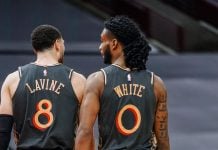 Kentavious Caldwell-Pope says the Lakers have put a lot of pressure...