The first half in Washington was one of the Knicks’ best of the season. After a sluggish first few minutes, Bobby Portis and Frank Ntilikina took over, and the bench gave New York a big lead. They were up 70-54 at halftime but fell apart in the second half, and lost 122-115 to the Wizards.

The Knicks next game is at the Atlanta Hawks on Wednesday. 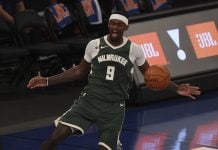