Absolutely. For the seven I’ve been in, I think this was probably one of the better ones. We were actually out there competing and we were arguing with the refs. It felt like a real playoff game and that’s what makes it fun. 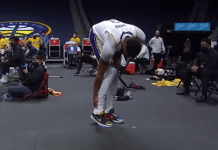