Andre Iguodala addressed his current situation with the Memphis Grizzlies, 48 hours before the end of the trade deadline.

The Grizzlies are trying to trade Iguodala and are not willing to buy out his contract. For his part, the veteran forward stated it was never his intention to not play for the team, but rather letting them use him how he’d fit best.

“It’s never been, ‘I don’t want to be there. It’s, ‘Let’s have the conversations in terms of what it looks like going forward. How can I be a value to you? How can you be a value to me? And then how can we make that happen,” Iguodala told ESPN’s Kevin Arnovitz.

The Grizzlies have less than 48 hours to trade Iguodala. The trade deadline expires on February 6. 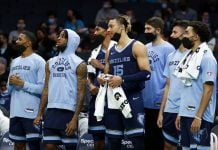 Frank Vogel: “Trevor [Ariza] did for the first time this season...