Three more European players have declared themselves for the 2012 NBA Draft. Turkish forward Furkan Aldemir is the only player who is currently projected to be drafted late in the second round though.

Furkan Aldemir made his Euroleague debut this season with Galatasaray. The 20-year-old forward averaged 6.6 points anf 4.8 reounds in 17 minutes of play for the Turkish club in Europe’s premier club competition. He is also a member of the Turkish national team despite his young age.

Sertac Sanli, Aldemir’s temmate in Galatasaray, was a member of the Turkish youth national teams in all age groups. However, Sanli is not getting significant playing time at his current club. The 2.09m center appeard in three Euroleague this season averaging just little bit less than five minutes on the court. 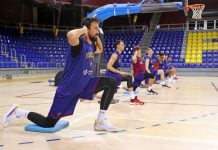 Lakers’ Anthony Davis no timetable yet to return — report