After his 47-point career high against Atlanta, Nikola Jokic was once again incredible against the Dallas Mavericks, scoring 33 points with 26 of them coming in the second half.

Moreover, he produced 21 points in the third quarter (career high for a quarter) and made the winning shot with 7.9’’ remaining in the regulation, putting the Nuggets in front (107-106).

The “Joker” had also seven assists and six rebounds in 31 minutes, leading his team to the third win in the last four contests.

The Nuggets stand at 26-11 record, being the second best team in the Western Conference. 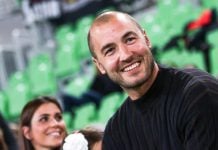