For Pascal Siakam, winning an NBA title in his third season with the Toronto Raptors in 2018-19 and earning the league’s Most Improved Player award were great achievements.

But there was no time to rest on his laurels.

After all, Siakam remains hungry to keep getting better.

The 25-year-old has taken another quantum leap this season. Through 26 games, Siakam is averaging a team-best 25.0 points per game. Last season, he averaged 16.9 points. He also leads the club in rebounds (8.2).

One big reason for Siakam’s increased scoring is the development of a consistent 3-point shot, a weapon that he’s using with much greater frequency.

This season’s numbers? Siakam is making 2.3 3-pointers per game, taking 6.2 attempts and shooting at a .381 clip from beyond the arc.

Raptors bench boss Nick Nurse, in his second season at the helm, is impressed with Siakam’s growth as a potent 3-point shooter.

“I think it is pretty quick,” Nurse was quoted as saying by raptorsrepublic.com in late November.

“And you’ve heard me say this before, I still think he’s maybe 18 months away from being really deadly out there. Maybe I’m wrong, he seems to cut all my timelines in about half or, you know, more than that sometimes.”

For Pascal Siakam, confidence is a major part of the equation.

“His confidence is certainly at a high, high, high level and that’s a big part of shooting,” Nurse was recently quoted as saying by the Toronto Star.

What’s more, because he didn’t start playing basketball until he was 16, Siakam understands that devoting time to work on his game in the gym is a smart investment.

It began this way:

For hours he’d do the drills: easy shots right at the basket to get mechanics etched in his mind and body, foul shots to work on that form and develop consistency, and the easiest three-pointers an NBA player can get.

Every day – maybe 1,000 shots in all, working on all aspects of shooting – because if there’s one thing Pascal Siakam knows it’s that nothing comes without hard work.

Of all the astonishing and rapid improvements to Siakam’s game over the last NBA season and a bit, it’s his ability to consistently make jump shots that stands out. It’s amazing, really, that a guy who was such a shooting liability before last season has become one of the Raptors’ most effective long-range gunners.

“It’s always something I’ve been able to do: make sure I work on my craft every single day,” Siakam said, according to Smith’s article.

“I have to find a way to catch up to all the people that started playing when they were like five years old. I have a long way to go and every single day I know that, so I have to work double.”

A role model in the truest sense, Siakam remains a hero to countless children in his native Cameroon. 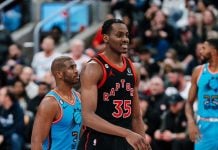 Pascal Siakam: “People who go to the G League and pout never come back” 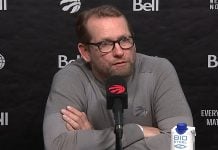 Nick Nurse after loss vs. Grizzlies: “It’s pretty unacceptable with the effort we gave”

Luka Doncic, Pascal Siakam have been named Players of the Week