Mateusz Ponitka played a vital part in a historic win(68-77 in OT) for Zenit against Olympiacos in “Peace and Friedship Stadium”.

The Polski guard was “instrumental” for his team posting 18 points(11 of them in the second half and overtime) and 5 rebounds on a 7/10 shooting night.

Moreover, his effort and aggressiveness in both ends of the floor last night was brought up as his best contribution so far this season in EuroLeague and was combined with writing his name to Zenit’s history book.

After the end of the game, Ponitka spoke to Talkbasket.net for the key elements of this “big” effort, the confidence that they built throughout the first three quarters and the “drive” for this game to become the first win of many more to come.

Q: Great win for your team. Your comment about the game?

Α:We started “soft”, the game didn’t started so well, 12-0 in the beginning, then we started playing our basketball and showed that we can compete. First of all, we started grabbing the defensive rebounds, which was one of the keys, and tried to stop the pick n’roll game of Spanoulis and Milutinov. Step by step, we built our confidence throughout the first three quarters. In fourth quarter we tried to keep the lead, but the came up with two big threes to send the game to the overtime. In the overtime, I would say we were a little bit better as a team.

Q: You showed your “fighting spirit” especially in the second half:

A: You know, we came here to fight and we had nothing to lose. We have respect for Olympiacos, especially here, in the “Peace and Frienship Arena”, they are a very strong and historic team in Euroleague. It was a great chance for us, as a new-built team, to prove that we can be competitive in this “stage”.

Q: First win in the history of your team in EuroLeague and first “big” win of the season. Your thoughts?

A: I hope that this will be a breakthrough for us, we were waiting for this win, you know, we are working hard in the practices. It was a great for us, but still we have to remain humble. There is more games, even tougher games, like that of Panathinaikos at home next week. Basically, there are even more challenges to play against some of the best players in Europe. We are hungry for more , we are a team that it needs to prove something and it will fight until the end. Basically that’s what drive us and It’s great to get the first win in the history of the club, but let’s fight for another one. 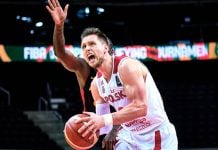 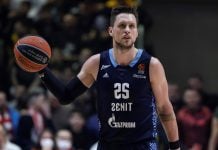