This was the first time that Mega Bemax is playing the ABA League in Belgrade as a host and unfortunately for them, they lost in the first game against the team from Ljubljana.

From the beginning of the game, guests were forcing their rhythm. After 10 minutes Cedevita Olimpija was leading by 8 (16-8). In the second part of the game, Mega managed to get back and in one moment guests were only leading by 4 (26-22). But then the team from Ljubljana took control again and after 20 minutes score was 41-32.

In the second half, Cedevita Olimpija was only protecting their lead and easily managed to increase their advantage and celebrate.

The best player for Cedevita Olimpija was Marko Simonović with 24 points and 4 steals (index rating of 28). His teammate Codi Miller-McIntyre added 13 points, 10 rebounds and 5 assists (index rating of 25), while Filip Krušlin scored 12 points.

On the other side, in Mega Bemax, the best was again Marko Simonović (loaned to Mega by Cedevita Olimpija). Young center finished the match with 12 points and 7 rebounds. Uroš Trifunović scored 11 points, while Luka Ašćerić added 10.

Jacob Pullen: “Michael Beasley is probably the best player I’ve ever played with” 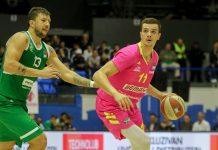 Marko Simonovic will play for Bulls this season