Generally, the guard play is dominating the FIBA Basketball World Cup, that taking place in China with many teams depending on their perimeter players in order to have a chance to win it all.

Moreover, teams which their strength relied on their front line eliminated in the round of 16 and in the quarter finals.

Namely, the Greek national team with NBA MVP, Giannis Antetokounmpo, and the team of Serbia, with Nicola Jokic and two quality back-ups in the bench like Boban Marjanovic and Nikola Milutinov.

Also, the Lithuanian team is out of the tournament, although they had a talented duo in the front line consisting of Jonas Valanciunas and Domantas Sabonis.

On the other hand, teams with accumulation of talent in the guards position are coming through with the “goods” in the World Cup.

Namely, Czech Republic’s national team with Tomas Satoransky having the role of the main ball-handler.

Additionally, the Argentinian team depends on the two-guard play of the incredible Facundo Campazzo and the MVP of the ACB Nicolas Laprovittola.

Furthermore, the national teams of France and USA, respectively, depend solely on the perimeter skills of Nando De Colo and Kemba Walker

Moreover, Australia’s national team is also depending on its perimeter to produce points in an efficient way with the likes of Patty Mils and Mathew Dellavedova having some good performances so far.

Tomas Satoransky is a distinctive paradigm of the dominance of the guards in the tournament being the star of the Czech Republic’s national team.

His coach, Ronen Ginzburg, surrounded him with capable shooters that will “open” the court for him, while the Chicago Bulls’ guard is also capable of creating his own shot.

According to mundobasket-stat.com, he is scoring about 15 points per game on 45% in FG% and 43% from the three point line.

Also, the Bulls’ guard is averaging about 6 rebounds and 7.4 assists being one of the best perimeter players of the competition.

Another, point guard that have great impact on his team, while being on the floor, is Facundo Campazzo.

The Argentinian “speedster” had a dominant performance in the game scoring 18 points, distributing 12 assists and grabbing 6 rebounds.

The star of Real Madrid is having a great impact in the World Cup so far averaging about 14 points and 8 assists on 56% in FG% according to FIBA.basketball.

Argentina squad will “fight” for its third appearance in a World Cup final against either Team USA or France.

On the other hand, Czech Republic’s national team will face Australia competing for qualification in the semi finals of the tournament.

Concluding our analysis, it’s clear that the perimeter players determined the success of the teams in this tournament so far and it remains to be seen, if that trend will continue through to the end of the World Cup. 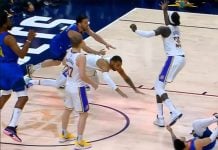