In an appearance on NBC Sports Bay Area’s The Warriors Insider Podcast, the Golden State Warriors co-owner Joe Lacob talked on swingman Klay Thompson, who torn his ACL in Game 6 of the 2019 NBA Finals:

This past season, the 29-year-old sharpshooter averaged 21.5 points, 3.8 rebounds and 2.4 assists per game. 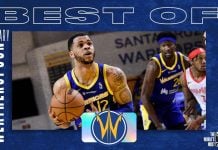