Jayson Tatum will remain out of action for five days, according to Marc Stein of the New York Times.

Tatum will miss the next two games of Team USA (against Japan and the winner of the match between Greece and New Zealand) and his condition will be re-evaluated prior to the battle against Brazil on September 9th.

Tatum suffered a left ankle sprain in his team’s victory over Turkey in overtime (93-92). Team USA advanced to the Round of 16. 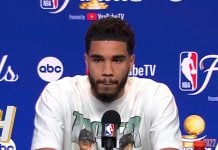