Donovan Mitchell talked about the defeat of Team USA to Australia in a Basketball World Cup preparation game in Melbourne.

Here is what the guard of the Utah Jazz told reporters:

“I think everybody makes more of a big deal out of it than we do. For us, the main thing we learned is that this is a dogfight. It’s a little bit different than NBA basketball. I think that’s one thing we’re getting used to.

These teams have played with each other since they were much younger. We have about three or four weeks under our belt. So, we have to be able to match that chemistry, match that intensity as quickly as we possibly can.”

Team USA will play its final preparation game prior to the start of the World Cup against Canada on Monday (26/08). 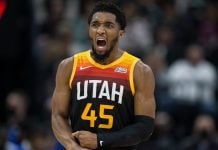 Source: No question Lakers would have made move for Donovan Mitchell