Michael Roll made the two-pointer, with 0.2 seconds to go, and gave Tunisia the 76-78 victory over Japan in Saitama.

But, the guard of Olimpia Milano took over and made the two-pointer to hand his team the win.

Roll finished the game with 19 points, while Salah Mejri added 20. On the other hand, Yuta Watanabe had 17 points for the losing squad, which played without its best player, Rui Hachimura. 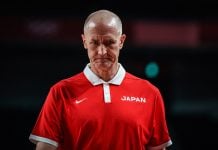 FIBA AfroBasket 2021 Day 5 recap; matchups for next round taking shape