“Who wins 1-on-1 prime Tracy McGrady or prime Kevin Durant?” was the question that SLAM asked their followers on Twitter. For JR Smith it was an easy call.

In a response to JR Smith’s tweet McGrady said: “I think the problem lies… is when the kid that plays for Cleveland tweeted out “KD not even close”. Come on now. Now you are being disrespectful on this.

“I don’t know what this jit’s problem is.” 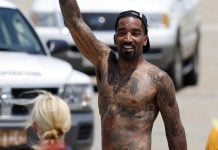