The older brother of the NBA star CJ McCollum explained why some of the biggest stars are declining Team USA invites.

Errick McCollum, whose brother has also decided not to join Team USA for the year’s FIBA World Cup in China, in a response to a tweet of CSKA’s Will Clyburn listed some of the reasons why the players are not motivated to play for the national team:

1. Injury risk esp if up for extension/max deals (IT, cuz, drose injuries & drops in $$ scare players)

4. You don’t get your focused off season training” 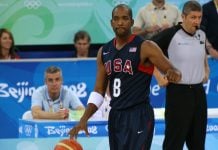 Kyle Kuzma on playing for Team USA in Olympics: “It would be a great honor, for sure” Trae Young: “We’re happy we made it to the Eastern Conference...