Of the 58 players selected in the 2000 NBA Draft, Jamal Crawford was the last active player during the 2018-19 season.

And Crawford will likely play a 19th season.

His name has popped up in the headlines and on social media in recent days, fueling speculation that he’s being pursued by several teams.

On a recent episode of “The Fabulous Pelton: Seattle Sports and More” podcast, Jamal Crawford talks about the spirited summer competition in the Crawsover Pro-Am League and the enjoyment that it brings to the Seattle community.

“The Crawsover Pro-Am League is one of the premier competitive summer men’s basketball leagues in the United States featuring current and former professional, international, minor league, and collegiate players, filling the empty void of basketball in Seattle,” reads a statement on the pro-am’s circuit’s website. The pro-am was started by Doug Christie in 1996, and operated by Crawford since 2013, according to online reports.

Another season in the NBA is not some crazy idea for the man dubbed “JCrossover.”

In fact, it makes perfect sense.

He’s been a great sixth man for most of his pro career, as evidenced by the year-by-year numbers.

And don’t forget that the University of Michigan product excelled during the final stages of last season.

That’s not a misprint. Jamal Crawford scored 51 points against the Dallas Mavericks in the last game of the 2018-19 campaign for the Phoenix Suns.

It was his highest-scoring game since putting 50 points on the board for the Golden State Warriors in December 2008,

“I’m 39, but I know I can still play,” Crawford told the podcast posted above while also noting he had a career-high 14 assist game this past season (in December against the New York Knicks). 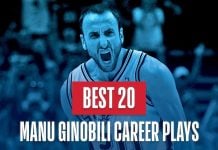