From his days as a prep star for Treadwell High School in Memphis to his present gig as a college basketball coach, Penny Hardaway has enjoyed a rich basketball life.

The longtime NBA player recently added another item to his long list of achievements: a member of the Memphis Sports Hall of Fame’s inaugural class.

“Anfernee ‘Penny’ Hardaway — Most accomplished basketball player in city’s history. All-America (1992-93) at Memphis State, third pick in 1993 NBA draft, two-time first-team All-NBA with Orlando Magic, and member of the 1996 gold-medalist U.S. Olympic team. Took over coaching duties at the U of M in 2018.”

The inaugural class will include 22 individuals (athletes, coaches and contributors) to celebrate the first 200 years of sports history in Memphis, which is why the Hall of Fame is dubbing it the “Bicentennial Class.”

According to published reports, the Memphis Sports Council and Memphis Tourism is planning to open the Hall of Fame at Auto Zone Park, home of minor league baseball’s Memphis Redbirds, on its press level.

Penny Hardaway, who turns 48 in July, is entering his second season as the University of Memphis bench boss. The Tigers went 22-14 in his first season at the helm.

And it appears that Hardaway, who played for the school from 1991-93, is on the right path, building a successful program. And it all starts with top-level recruiting, from his hometown and beyond.

“With talent such as the No. 1 player in the country James Wiseman, five-star Precious Achiuwa, four-star Lester Quinones and four-star Boogie Ellis among others, Memphis’ roster has very few – if any – weaknesses on paper. That roster strength now has Memphis thinking sacrificially as they firmly plant themselves in the national discussion as a preseason top 10 team,” the website 247sports.com reported in May.

“What happened early is that Boogie, James, Lester and Precious all got in a group chat. All they’ve been talking about is sacrifice,” Hardaway told 247 Sports. “There are young leaders emerging from this group chat. They’re saying, ‘Hey, we’re going to sacrifice,’ to one another so we can all have the bigger goal.”

Indeed, Penny Hardaway is ambitious and eager to build his legacy as a head coach.

But above all, he has an unbreakable bond with his hometown. 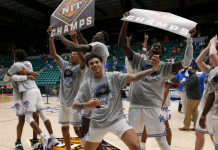 Five NBA Stars Whose Careers Were Ruined By Injuries