In an interview with TalkBasket.net after Fenerbahce’s final practice at the Fernando Buesa Arena, Erick Green talked about the team’s injuries.

Here is what the American guard said:

On the injuries to key players of Fenerbahce: “Every time this happens, another player steps up. We have been through that a lot of times. This is what we are going to do, play well, play hard and hopefully win.” 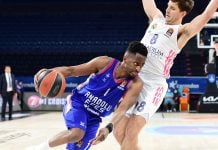 Donovan Mitchell to have MRI after suffering ankle injury vs the...