Promitheas Patras rallied past Strasbourg at home (77-64) and came very close to the qualification to the playoffs.

The visitors were in front by just two at halftime (39-41), yet the hosts turned things around in the second half.

The Greeks outscored their opponents 38-23 in the last 20 minutes and cruised to an easy victory over the French team (77-64).

Nikos Gkikas and Langston Hall led the winners, with 16 and 13 points, respectively.

Promitheas improved to 8-4, whereas Strasbourg dropped to 6-6.

The first day of the 12th round in the BCL saw Murcia defeat Anwil (78-70) and secure the top spot in Group A. 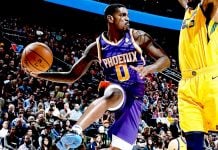