Zalgiris Kaunas announced the acquisition of Deon Thompson for the remainder of the season.

The 30-year-old power forward/center started the season in Spain, where he played for San Pablo Burgos and averaged 12.5 points and 5.6 rebounds.

Thompson will replace injured center Antanas Kavaliauskas and is expected to make his debut against Fenerbahce on Thursday (10/1). 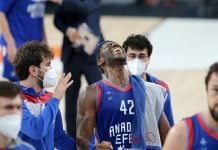 Marc Gasol dislocates his finger in game vs the Celtics