Lokomotiv Kuban announced today that head coach Sasa Obradovic was let go and the team will start looking for his replacement.

The club’s assistant coach, Vlada Jovanovic, is expected to take over as an interim coach.

Obradovic spent the previous two years with the Russian squad, leading the team to the EuroCup semi-finals in 2017 and the Finals in 2018. The Serbian coach won the 2018 EuroCup Coach of the Year Award.

The club also claimed the fourth place in the VTB League in 2017 and the fifth one last season.

Coach Obradovic thanked the team for their collaboration.

We thank Saša for his work and the results the team achieved under his guidance. We wish him all the best in his future career. #Lokofamily will never forget you! pic.twitter.com/IhrZIHmFNc 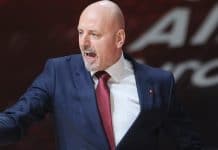