Amedeo Della Valle made the big step last summer, moving from Emilia Romagna and Reggio to Milan and Armani. The Italian team is already sending signs all over the continent that this year will have nothing to do with the previous ones, as it seems capable of claiming a spot in the Euroleague playoffs.

The match against Olympiacos at the Peace and Friendship Stadium is the most tangible proof for this, with the impressive 99-75 in favour of the Lombards capturing the absolute dominance of the team of Simone Pianigiani. TalkBasket.net sought answers to this year’s Armani Milan version from Della Valle, who, just like his team, wishes to be reintroduced to European basketball fans by playing on the big scene.

“This was an important victory because we were coming from a defeat by a few points to Real Madrid at home and wanted to fight back“, says the 25-year-old guard who explains how Armani overcame the Reds’ desire to stay unbeaten: “We are happy with how it went. Of course, we knew that Olympiacos were coming from two wins in a row and they wanted to have the perfect premiere at home. But we came out with great intensity, managed to have more energy than they had and eventually bring home the match”.

Q: What was it that you did in order to dominate?

A: I believe that the most important thing is that we followed the game plan. We limited Spanoulis, who in fact scored only three points. He is clearly their leader and one of the best players in Europe. By doing so, the other players of Olympiacos found less room to play.

Q: Did you get overexcited after this result?

A: We are fully aware of the fact that we’re a new team. In recent years we didn’t have the team to win these kind of games and the overall result was not satisfactory. This year we have the knowledge and we want to try to change things.

Q: How’s your transition from Reggio Emilia to Armani Milan?

A: So far, it’s a good experience. I think it’s a starting point in order for me to grow and continue improving in the Euroleague. I’m settling in well. It is clear that in my first year in the Euroleague I try to do the necessary things so that the team wins ; perhaps, by playing less, but I’m happy when we win. It’s the only thing that matters.

Q: Do you think that your case resembles Davide Pascolo’s, who had great seasons with Trento and was given a chance in Milan?

A: Yes, I know that he returned to Trento. Davide didn’t find his place in the team’s rotation and decided to return to his former team. It is clear that he had a role different than mine. It is also clear that in these Euroleague matches I’m getting playing time. I want to keep improving.

Q: I mean that for a young Italian player it is hard to find room in a Euroleague team.

A: It’s not easy because the ambitions have grown a lot. But since my coach has confidence in me, there is no problem. It is a tough road but I’m happy to be where I am.

Q: Do you think that the expectations this year have changed?

A: For sure, the administration wanted to build a roster in order to enter the top eight. This is our first goal and we will absolutely try to achieve it. In the Euroleague, we know how difficult it is to get to the top because there are many teams very well prepared. Especially since the ones that always go to the Final Four like Real Madrid, Olympiacos, Fenerbahce and CSKA are all teams of the front row. So, it will not be easy but we want to be among the first eight.

Q: Which team do you see as the strongest this year?

A: Obviously, Real Madrid. We lost at home against them, controlling the match in one part. Then, when they decided to win the game, they did it.

Q: How was Olympiacos as an opponent?

A: They are a strong, new, very young team. So I think that with one of the best coaches in Europe like David Blatt they have already started well and at the moment they have as many victories as we do.

Q: This year you are playing alongside important players in the Euroleague like James and Nedovic. Does it help?

A: It’s absolutely great for me because I can learn, train and see how they do it. It’s a great start because I’m new on the team, I do not know how it works and seeing them play helps me a lot. Being able to play with them is something beautiful.

A: Spanoulis is one of them. I also think of De Colo, Hines, Vesely. As for me, I would like to win a championship before defining whose career path I would like to follow.

Q: To what extent is the Euroleague different from the Eurocup?

A: In the Euroleague, there is no time to rest and you always have to be fresh during a long season. So, sometimes it’s not important to play so many minutes but play well in those few minutes. For instance, this week we play three games and we have to be ready.

Q: What’s the competition in Italy, since Armani Milan seems to stand out?

A: It is difficult because it is true that we are the only Italian team in the Euroleague but there are also many teams playing in the Eurocup and in some gyms it is very difficult to win. When it comes to the final phase of the Italian League, the playoffs are very fierce.

Q: Do you think the structure of the Italian League has made the majority of Italian players -young or not- view Armani Milan as a one-way street?

A: That’s a good question. For sure, the League does not help Italian players so much and this can be seen from the way the basis of our basketball is organised. Very few young athletes are coming out. Many have chosen alternative routes: go to college or become professionals in Lega Due. So, it’s not easy for them.

Bayern Munich remains alive in the series against Milano 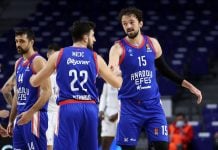 Several Raptors’ players ‘can’t wait to get out of Tampa’, per...

Kyle Kuzma: “I wish we could get a little bit more...