According to si.com, the San Antonio Spurs player Dejounte Murray tore his right ACL. Murray suffered the injury playing in preseason game against the Houston Rockets.

The result of MRI confirmed the worst case scenario – due to the damaged ligament, a 22-year-old point guard could miss the entire season.

Since the 2018 January Murray has played in the Spurs starting lineup over Tony Parker. Last season Dejounte Murray was averaging 8.1 points, 5.7 rebounds and 2.9 assists per game, while shooting at 44.3 percent from the field. 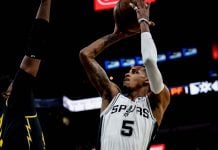 Steve Kerr on Dejounte Murray: “I think he’s an All-Star”