The 25-year-old player, who had talked exclusively to TalkBasket during the 2018 Final Four, played consistently last season and helped the Lithuanians qualify to the Final Four, for the first time since 1999.

Toupane averaged 6.9 points with Zalgiris in the Euroleague, while shooting at 37.5% from beyond the arc. 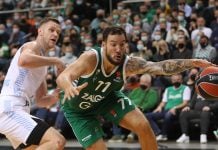