As Zenit Saint Petersburg announced earlier today, Kyle Kuric has parted ways with the club and will sign with Barcelona.

Even though the 28-year-old guard was under contract with the Russians, his contract included an opt-out clause in case a Euroleague club was interested in signing him.

Kuric, who holds a Slovakian passport, averaged 16.4 points in the VTB League last season, while shooting at 38.6% from the three-point range. 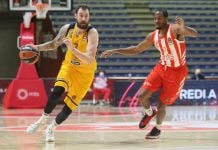 Sergey Karasev returns to Zenit on a one-year deal

James Worthy on Lakers Big 3: “They showed a little bit...