The 7’2” center averaged 13.5 points and 2.3 blocks a game last season as the Jazz reached the NBA Playoff Western Conference semi-finals.

Embiid is the third finalist for the 2017-18 Kia NBA Defensive Player of the Year Award, joining Gobert and Davis. The winner will be announced at the 2018 NBA Awards presented by Kia on Monday, June 25 on TNT (9 p.m. ET). The second annual NBA Awards, honoring this season’s top performers, will take place at Barker Hangar in Santa Monica, Calif.

Players were awarded two points for each NBA All-Defensive First Team vote and one point for each Second Team vote. Voters selected two guards, two forwards and one center for each team, choosing players at the position they play regularly. Players who received votes at multiple positions were slotted at the position where they received the most votes”. 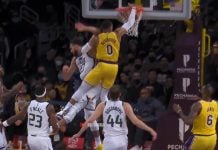