Scottie Wilbekin proved to be a nearly unstoppable force in leading Darussafaka Istanbul to the top of its group during the 7DAYS EuroCup Regular Season.

Despite this being his first EuroCup campaign and Darussafaka’s first in more than a decade, Wilbekin led the competition in scoring and his team did not lose a game in which he played, which were among the many reasons Wilbekin is deserving of 7DAYS EuroCup Regular Season MVP honours.

This season is the first time in the 16-year history of the competition that EuroLeague Basketball is announcing a mid-season award and Wilbekin is a rightful first honoree.

Wilbekin posted 19.0 points per game and ranked third in performance index rating with an average of 20.4. His ranked sixth in the competition with 1.7 steals and ninth with 5.1 assists per game in the regular season. Wilbekin knocked down at least 2 three-point shots in each regular season game and made them at an impressive 48.9% accuracy. Led by Wilbekin, Darussafaka opened the season with six consecutive victories and was one of the first three teams to clinch a spot in the Top 16.

Due to injury, Wilbekin ended up playing in seven regular season games, all of them as a starter, and Darussafaka won each of those seven games.

Wilbekin netted at least four three-pointers on three occasions, scored at least 20 points four times, had at least 5 assists in six different games and played three games in which he did not commit even a single turnover. Among his top performances were 24 points on 4-of-6 three-point shooting, 6 assists and 5 steals in an 85-77 victory over MoraBanc Andorra in Round 5 and 23 points with just 4 missed shots plus 5 assists in an 85-83 Round 2 win over Cedevita Zagreb.

This season is the third with Darussafaka for the 24-year-old guard. Wilbekin played four seasons of college basketball at the University of Florida and split his first professional season between AEK Athens in Greece and Cairns Taipans in Australia. He committed his future to Darussafaka when he signed a two-year contract extension in March of last season. 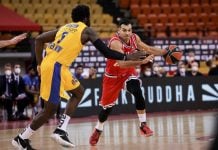