Seibutis (1.96 meters, 30 years old) enters his second season with Zalgiris. He averaged 8 points and 1.5 assists in 21 Turkish Airlines Euroleague games last season, in which he helped Zalgiris win the Lithuanian League title. Before that, he played in Lithuania for Lietuvos Rytas, in Turkey for Darussafaka Dogus Istanbul and Olin Edirne, in Spain with Bilbao Basket and in Greece with Olympiacos Piraeus and Maroussi.

He started his career with Sakalai, also in Lithuania, in 2003. He was an All-Eurocup First Team selection in 2011-12, and was also a member of the Lithuanian national team, with which he won a silver medal at the 2013 EuroBasket and a bronze medal at the 2010 FIBA World Championship.

Javtokas (2.11 meters, 36 years old) is set to start his sixth consecutive season with Zalgiris. He averaged 4.9 points and 3.7 rebounds in 9 Euroleague games last season. He started his career with Lietuvos Rytas Vilnius and bounced back from a career-threatning motorcycle accident to become a dominant center.

He helped Rytas win three Lithuanian League titles in 2000, 2002 and 2006, lifting the Baltic League trophy in 2006, getting the NEBL trophy in 2002 and above all, leading his team to the ULEB Cup crown in 2005, earning final MVP honors. Javtokas moved on to play for Panathinaikos Athens, helping it win the triple crown – Greek League, Greek Cup and Euroleague titles.

He has also played for Dynamo Moscow and Khimki Moscow Region of Russia, as well as for Valencia of Spain. Javtokas has won five consecutive Lithuanian League titles in as many seasons with Zalgiris, lifting the Lithuanian Cup trophy in 2012 and 2015. He has also helped the Lithuanian national team get back-to-back silver medals at EuroBasket 2013 and 2015, as well as conquering a bronze medal at the 2010 FIBA World Championship. Zalgiris also announced that Siim-Sander Vene, Kaspars Vecvagars, Jerome Randle and Olivier Hanlan will not be with the team next season. 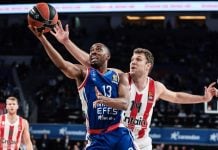